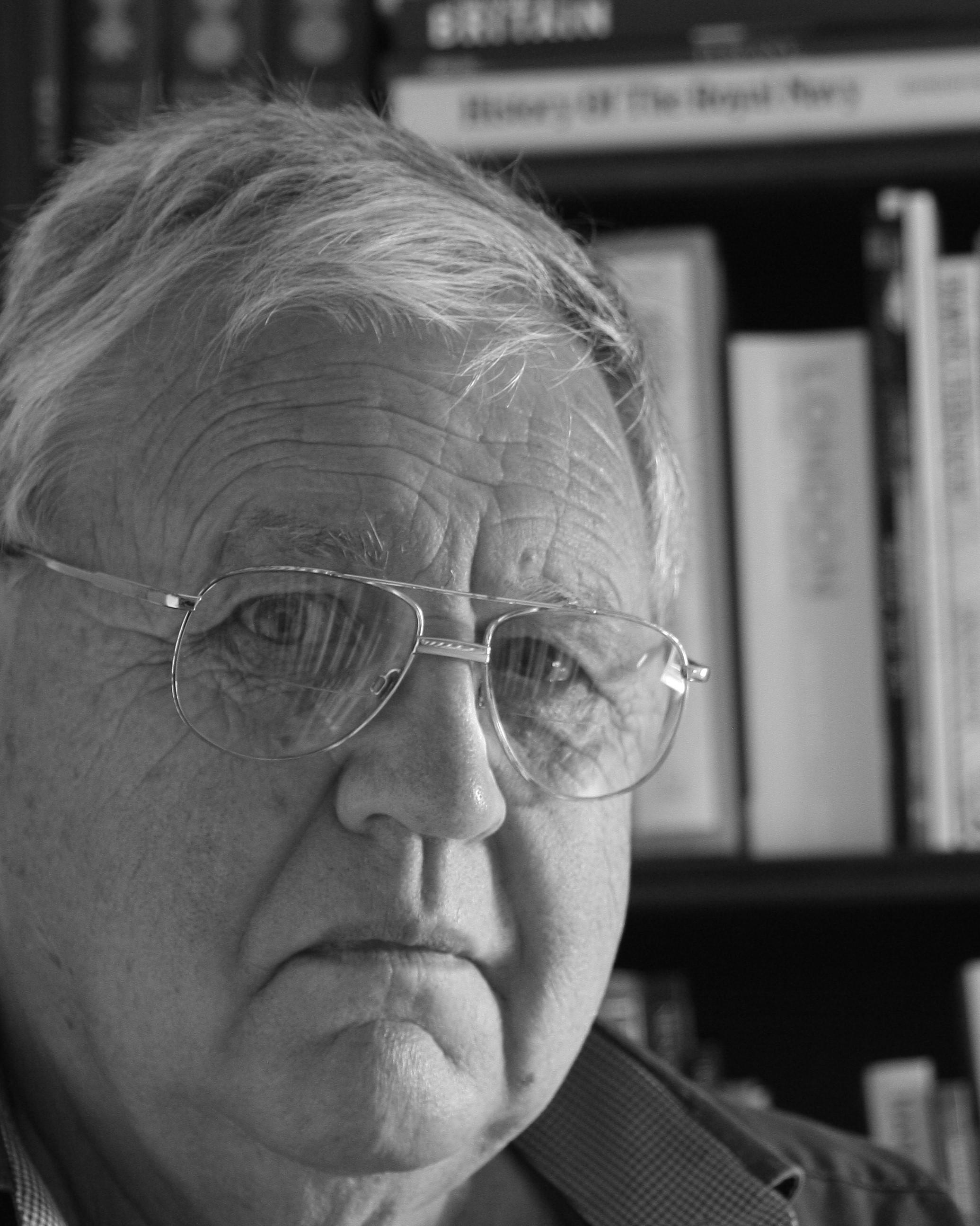 Lou is married to Gillian and they live at Tavistock, Devon; they have two grown-up sons.  Following a varied and interesting career in the police he retired as an Acting Chief Inspector. He first started to seriously write in 2007 and has produced a number of short stories and books.  Lou was the Chairman of the Plymouth Writers’ Group for ten years.

He has created the fictional character Detective Inspector Frances ‘Frank’ Steadwell who performs her duties in a very unorthodox manner, and not necessarily within the law.

The Three Brethren was a fabulous and unique shoulder-clasp jewel that went missing from the English crown jewels in 1645. Fifty years later it resurfaced in the possession of a Spanish privateer in the Caribbean port of Nassau. Operating on behalf of the mysterious Mister Dingle, a Captain Hickey and crew are tasked to find the jewel. They are given a schooner called Greyhound in which to carry a ransom in unique gold coins, and are tasked to regain the jewel and return it to England. Neither the Three Brethren nor the gold arrive back, and the ship and all hands are assumed to have been lost off the Cornish coast during the Great Storm of 1703.

In the present day. The three Wise Brothers are London criminals who have settled on the Cornish coast in the isolated Penkrav Manor, near Penzance. They have ambitions to run the town for their criminal enterprises and have build a substantial property portfolio to further their unlawful ambitions. The Three Brothers have recruited a motorcycle gang as runners and enforcers and have also compromised the honesty of the local police chief. However, and despite supplying drugs to the local pushers, they have run out of cash and cannot complete their plans.

An informer working in the Royal Mint has sold the Brothers confidential information on the wreck of Greyhound, which is believed to be in the vicinity of Penkrav Manor. Recovering its cargo would result in a fabulous financial windfall for them, and they are searching for it to finalise their plans to establish them as criminal overlords. Detective Chief Superintendent Frank Steadwell ( posing as a Detective Inspector military liaison officer) is running an assassination team for MI5. She has been tasked to infiltrate the Three Brothers network and to smash it as a salutary lesson to the criminal underworld, and to also prevent the so-called ‘Penzance Project’ from coming to fruition.

The wellbeing and life expectancy of the Brothers is of little or no importance to the final objective. She must infiltrate the Brothers tight knit gang and break it up from the inside. With the help of a retired Detective she meets two gypsy sisters who know what is happening in the town; mystics and astrologers, they bring a different dimension.

The backdrop to Frank’s mission are the mid-summer celebrations that culminate in the parading of the Penzance hobby horse, Penglaz.

However, there is a wild-card assassin on the loose. The physically huge Pole called Tom Thumb has a unique way of killing his victims. He also has a different agenda to Frank Steadwell which could result in their paths converging.

An Untouchable Silence.  Military Intelligence belatedly learn of a terror attack targeting a military parade on Plymouth Hoe, scheduled for a forthcoming August Bank Holiday weekend. They have four weeks to identify and prevent ‘Operation Untouchable Silence’ aimed at the military and general public.  If successful it would result in tens of thousands of casualties.

An undercover police officer using the codename Seagull has severed contacts with his handler and is suspected of having turned to crime in Plymouth’s red-light district. Seagull knows what is happening in the underworld and may have knowledge of the attack. Detective Chief Inspector Frances ‘Frank’ Steadwell – who recently completed a course with Military Intelligence – forms a team to find Seagull and bring him back by whatever means.

Working in the shadowy world of counter-espionage Frank’s enquiries uncover Seagull’s involvement in drugs, illegal immigration and child slavery. She also identifies a terrorist quartermaster and the terrorists’ safe house.

Does Seagull come in from the cold?

How will the attack go ahead?

Who are the attackers, and what is their motive?

Can Frank Steadwell prevent the attack from happening? 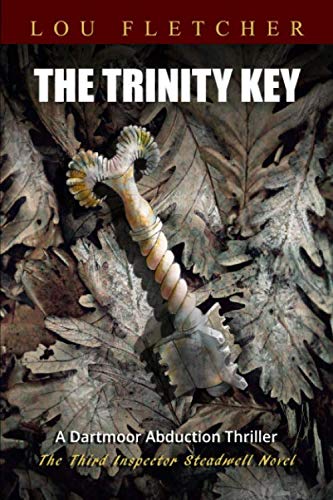 Introduction.The abduction of a teen couple could have been a publicity stunt by an animal rights group until the man is murdered in an execution-style shooting. The ongoing disappearance of the girl, Tanya Grant, is investigated by Detective Inspector Frances ‘Frank’ Steadwell and her deputy Detective Sergeant Robin Allenby of Tavistock Police. George Grant, Tanya’s father, is a military intelligence officer and Frank Steadwell suspects he is under pressure by Russian spies to reveal details of a top-secret project known only to him: it is called The Trinity Key. Satanists also claim the responsibility for the girl’s abduction and Steadwell is aware that two other girls have also disappeared without trace in the previous twelve months. All three girls made drawings of a Bull, Ram and a Cockerel in the lead-up to their disappearances. Steadwell follows evidence to Holy Trinity Church in the Devon town of Buckfastleigh and finds the sepulchre of Squire Richard Cabell, an historical local scourge and Devil worshiper who has been dead for more than three hundred years. The church is a roofless, burnt out shell. She learns that the church had been deliberately burned down and Satanists were strongly suspected of the arson attack. Sergeant Allenby’s beautiful private eye girlfriend, Abi Cantrell, is secretly making enquiries on behalf of a national newspaper who wish to scoop an Occult story. She is very unorthodox, is quite capable of breaking the law to get her way and is posing as a prospective member to gain entry to a Satanist group. There she encounters The Master who is a dangerous and evil disciple of the dead Squire Cabell. The Master is running a Black Magic paedophile sex ring calling itself The Menagerie Band, whose members use animal head disguises.A British spymaster takes Steadwell into his confidence and confirms the presence of Russians who are holding Tanya hostage. George Grant passes Steadwell the secret of The Trinity Key from his deathbed which sets the scene for the outcome of fast moving events and a final confrontation. Murder, Abduction and The Occult react with Espionage in which Frank Steadwell plays her part in thwarting the designs of the Russians, and seeing the powerful Trinity Key used for its intended purpose.

Sir Francis Drake’s horde and sword are found beneath the front steps of a Tavistock hotel, which leads to their public display. Who will come to steal the treasure? What are their motives? Can the police successfully guard it? Detective Inspector Frances ‘Frank’ Steadwell is faced with a series of murders, and then an attempt on her own life. A fast-moving story which draws on the author’s knowledge as a Tavistock police officer, and which leads to a startling conclusion.

Can a tonne of gold ever be forgotten? People have a long memory where gold is concerned. A mans body is found in a snowed up cave at Leeden Tor on Dartmoor, dressed in an odd selection of ill-fitting clothing. He carries no clue to his identity. Detective Inspector Francis ‘Frank’ Steadwell believes the body was arranged after death and concludes that Mister Leeden has been murdered. Her enquiries uncover a legend about one tonne of Polish government bullion that was snatched in 1939 ahead of the invading Nazis. Rumored to have been brought to England and hidden at an RAF airfield at Yelverton on the edge of Dartmoor, from there it was lost. Frank steadwell believes that Mister Leeden was murdered in his quest to find the gold. Selena Leigh may know more about the gold than any living person but is a sullen mute and unable to communicate. Enquiries are frustrated by Selena’s psychologist, Professor Caroline Cory, and Frank is also plagued by the scheming private eye Abi Cantrell, who has her own agenda for Mister Leeden’s corpse. The arrival of the ruthless Colonel Kowalski of Polish military intelligence adds credibility to the existence of the horde. There are too many people interested in the gold and a race has begun to find its whereabouts. Then the murders begin. Who was Mister Leeden and who sent him? Did he want the gold for himself or another? Is there a key to unlocking its hiding place? DI Steadwell uncovers the truth which leads from child cruelty, through greed, to nationalistic ambition and murder. People are out of their depths and pay a terrible price for their avarice. Twisting and turning the story ends with an unexpected conclusion.

Chief Inspector Chris Cox and Inspector Reynard Fox are sent to the City of Plymouth where local detectives are making no progress in a series of murders. Corpses, bearing different sets of ritualistic mutilations, appear to have challenged and defeated them. Outsiders are unwelcome and they soon clash with the senior investigators – the offensive bully Chief Superintendent Slanning and his fussy and ridiculous assistant Inspector Lynaugh. Cox and Fox quickly uncover a web of police corruption that is being manipulated by the vivacious and ruthless news reporter Eli Mortlake. Turning to the world of academics and historians, and assisted by the death-bed confession of a policeman, they learn of the existence of the fabulous Bohemian Ruby. Stolen from the Bohemian Crown in Prague centuries earlier, the ruby has a massive secret. It also has a powerful presence and carries a curse for any who misuse it. The ruby disappeared after being sent to assist in a siege of Plymouth three hundred years earlier, and its ownership has been fought over since by two mysterious sects of demi-monks who have a secret world of caves and tunnels beneath the city . Cox and Fox suspect that the ruby has re-appeared and they begin to understand its past, but not its power and influence. Following leads to Prague, Amsterdam, and back to Plymouth, Cox and Fox discover the meaning of the ruby but time is running out as the secret sects struggle with international terrorists who seek the power of the jewel for their own unspeakable ends. Blood, violence, and abduction surround the ruby as it fulfils the promise of the curse. Cox, flawed by a burden he carries from his service as a US soldier in Vietnam, is left to broker a solution as Governments distance themselves. The ruby has captured the attention of both Christian and Muslim fundamentalists and Chris Cox must strive to find a safe resting place for the Bohemian Ruby – a place that will please everyone.