Many of the writers in the group have self-published and also have publishing agents.

Please help support our local writers and have a look at their books on Amazon, either as Kindle or Paper/Hardback verisons.

Your support is really important!

This collection is for people who might have a few minutes to spare, perhaps waiting for a plane or train, a meal to cook, the baby to cry for a feed, or a lunchtime break away from the office. Sitting on the beach? Want something to read, apart from newspapers and magazines? My writings are designed to be as varied as the potential reader. Murder, mayhem, melodrama and mystery mixed with some fun, fantasy, love and even reflections at a deeper level. Ideal reading whilst waiting nervously for that Dentist or GP appointment. Short fiction stories pose their own particular challenge for any writer. Within a few words the reader has to identify with the characters, follow the storyline, and accept the outcome. Sometimes the reader may wish the writer had developed a particular storyline into an extended short story or full novel. Others might well believe the story (and writer) should have been strangled at birth. If that’s the case – sorry! Either way I am genuinely interested in your views on my second published work, and would welcome feedback at Alan Grant algrant61@sky.com;. Best wishes and thank you for at least turning a few pages.

The death of a schizophrenic young man in Plymouth, provides evidence of a sordid chain of sexual exploitation, involving mysterious, powerful people and a vulnerable young prostitute. Melissa’s grooming, abuse, and increasing drug reliance, indicates corruption at high levels, in the Council and Police. The immediate response comes from DCI Ben Kennedy, who is the most skilled negotiator in the force. When Melissa disappears, evidence of an impending gang war between criminals from Plymouth, London and Liverpool emerges. The death of a rough sleeper, shows that itinerant Gypsy travellers also have a direct interest. DCI Ben Kennedy, and his CID team of DS Sonia Amis and DC Jason Street, race against time to find Melissa, whilst confronting the brutality of gangs intent on flooding the South West with drugs. They confront corruption, violence, drugs, and a criminal operation, which stretches the team to their limits.

Journey through a mind decorated with an eclectic mix of humour, revolution, paranoia, and engulfed by beautiful sea views. Fleeting thoughts, and burning joints… is a collection of image-bound poetry; with the inclusion of sonnets and haikus. Here, is captured the solitude of one Plymouthian’s imagination, and an introduction to alter-ego ‘The Smoking Joker’, covering the literary world in a thick haze of cannabis smoke.

Chief Inspector Chris Cox and Inspector Reynard Fox are sent to the City of Plymouth where local detectives are making no progress in a series of murders. Corpses, bearing different sets of ritualistic mutilations, appear to have challenged and defeated them. Outsiders are unwelcome and they soon clash with the senior investigators – the offensive bully Chief Superintendent Slanning and his fussy and ridiculous assistant Inspector Lynaugh. Cox and Fox quickly uncover a web of police corruption that is being manipulated by the vivacious and ruthless news reporter Eli Mortlake. Turning to the world of academics and historians, and assisted by the death-bed confession of a policeman, they learn of the existence of the fabulous Bohemian Ruby. Stolen from the Bohemian Crown in Prague centuries earlier, the ruby has a massive secret. It also has a powerful presence and carries a curse for any who misuse it. The ruby disappeared after being sent to assist in a siege of Plymouth three hundred years earlier, and its ownership has been fought over since by two mysterious sects of demi-monks who have a secret world of caves and tunnels beneath the city . Cox and Fox suspect that the ruby has re-appeared and they begin to understand its past, but not its power and influence. Following leads to Prague, Amsterdam, and back to Plymouth, Cox and Fox discover the meaning of the ruby but time is running out as the secret sects struggle with international terrorists who seek the power of the jewel for their own unspeakable ends. Blood, violence, and abduction surround the ruby as it fulfils the promise of the curse. Cox, flawed by a burden he carries from his service as a US soldier in Vietnam, is left to broker a solution as Governments distance themselves. The ruby has captured the attention of both Christian and Muslim fundamentalists and Chris Cox must strive to find a safe resting place for the Bohemian Ruby – a place that will please everyone.

Devonshire with a Hint of Albanian

The magical stick of legendary wizard Thalamos Thunderfire has been stolen! Thalamos must follow the stick’s aura and find out who the culprit is before the World Annual Spellcasters Competition, or he will stand no chance of regaining the accolade of the best wizard in all the kingdoms.

An uplifing celebration of perseverance and courage in the face of adversity.

Douglas sees the world from a wheelchair, and he hates it.
Thomas has always resented being an unwanted child.
Fiona walks a tightrope in her new life.
And who is the woman who takes her children to visit their father in prison?

A Gift from the Horse Chestnut Tree

Children. They don’t always have an easy life.
Susan is caught up in her mother’s grief.
Jessica has been very ill, and now she has another problem.
A fourteen-year-old inner-city boy goes on holiday for the first time.

Seven uplifting short stories to challenge your perception of childhood, and each one a prize-winner. 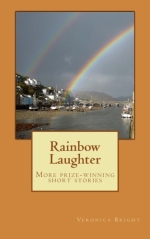 Wrong place? Wrong time? Or both?

You’ve only got one life, haven’t you?

Rainbow Laughter is a collection of nine insightful and powerful short stories about ordinary people, growing and changing, searching for hope when all seems lost.

Every story has won a prize in a competition.

How to create believable characters using the Enneagram

‘A fascinating approach to creating characters – and understanding our own characteristics. I recommend it.’

‘Getting the characters right is the key to good fiction. This book makes that so much easier.’

Detective Inspector Lou Beradino is not afraid to challenge Plymouth’s powerful and corrupt City Councillor, Ron Jellop, or his psychopathic henchman, Eddie Coaker. But, when his Hong Kong girlfriend, Meilin ‘Connie’ Wu, says she wants to marry him and start a family, Lou’s anxieties about his unknown father come at him ‘like a shark in the water’.
And then, of course, there’s the murder and attempted murder…
On sale at Amazon.co.uk